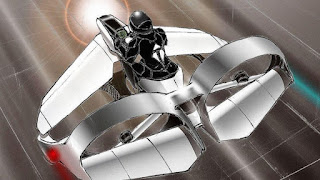 This Boeing GoFly, Top Ten winner is so cool it looks like its ready for Star Wars adventures.  It's called Tetra 3 and is the concept design created by Team Tetra of Japan.  It clearly looks like a flying motorbike.  The operator rides it like a motorcycle. And according to Team Tetra Captain Tasuka Nakai, the operator can work it and fly it like a video game.

Fun and Easy to Fly
The Japanese team says the Tetra 3 is easy for anyone to fly.  An electric motor powers the propellers.  The device can hover, take off and land vertically and fly horizontally, much like a plane with fixed wings.  To win the competition, it also has to fly non-stop at least 20 miles, safely, with minimal noise and comply with the international competition's size standards.

Takeoff Time
The rubber is hitting the road.  The futuristic, Star Wars-like Tetra 3 is now being built into a working prototype to fly for the gold.  $2 million in prize money to be awarded to one of the ten competing international teams to win Boeing's Go Fly competition.  The winner will be announced in March 2019.
#Boeing GoFly #Japanese personal flying machines #personal flight #personal flying machines