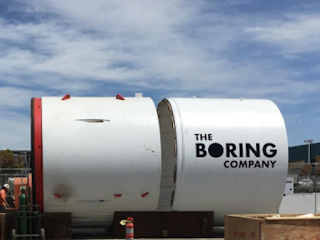 For China, Tunnel Based Transportation Systems
Billionaire entrepreneur Elon Musk just announced that he's going to launch operations of his Boring Company in China.  He'll do so during a trip to China for an artificial intelligence conference late this month.  The Boring company builds tunnel based transportation systems, including the Hyperloop.

From LA & Las Vegas to China
Musk has momentum going with the Boring Company, which is far from boring.  Musk recently won his first commercial contract to build a mile long shuttle to ferry tourists around the Las Vegas Convention Center.  He's also built a test tunnel at the company's headquarters in suburban Los Angeles.  In July, he raised $120 million from outside investors to help fund his tunnel projects and proposals.  He wants to build a tunnel system to connect Baltimore and Washington, DC.  That is currently under environmental review.  He's also proposed a tunnel system for Chicago.  He recently withdrew a proposal to build a tunnel to Dodgers Stadium in LA because of neighborhood concerns.