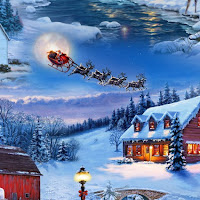 Santa Going High Tech, GTX, Electric
The recent International Sleigh Show at the North Pole debuted the first electric muscle sleigh for Santa's legendary Christmas Eve ride.  The chairman of Reindeer Motors Rudolph Reindeer said:  "Santa will be able to deliver gifts and complete his ride in record time with this high performance EV muscle sleigh.  The cockpit for Santa will be loaded with connectivity at the 6G level.  We'll make the muscle sleigh autonomous, so Santa and his reindeers can take a mid-air break between his global gift deliveries."

Santa Is Loving It
Santa commented:  "Most impressive is the advanced autonomous system Reindeer Motors has put in this sleigh.  With the burgeoning world population, I have more stops to make every year.  This gives me a chance to nap between stops."

Rudolph Is All For It
"This is clearly a GTX electric muscle sleigh perfect for Santa", Rudolph said.  "He'll be able to go from 0 to 25 Mach in .1225 seconds."  And, then, Santa assembled his majestic team of Dasher, Dancer, Prancer, Vixen, Comet, Cupid, Donner, Blitzen and, of course, Rudolph.  As they took off for a test ride, they were heard to say "Merry Christmas!  See you Christmas Eve!"