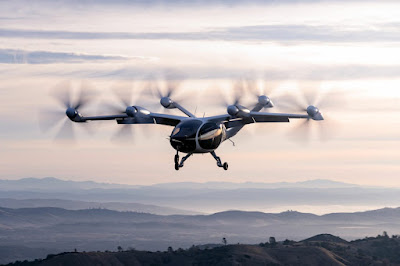 Delta to Invest Up to $200 Million in eVTOL Maker Joby Aviation                                             Source:  Joby Aviation Flying Taxis Are Right on the Horizon Delta Airlines is making a big bet on the future of flying taxis.  It is partnering with leading, California-based eVTOL maker Joby Aviation to deliver "Home to Airport" flying taxi services.  Delta just made a $60 million investment in Joby for a 2% stake in the company. Delta has the option to invest $200 million in Joby if Joby reaches certain operational milestones. The partnership's goal is to push air taxis forward to become fully operational in the commercial marketplace.   Tech Specs Joby's 5-seat aircraft is an electric vertical takeoff and landing (eVTOL) vehicle that's a cross between a helicopter and a drone. It's propelled by 6 tilt-rotors and battery powered electric motors.  It can hit speeds of 200 mph and has a range of 150 miles on a charge. The flying taxi prototype has flo
Post a Comment
Read more
More posts