Showing posts with the label #1st e-SUV
Show all 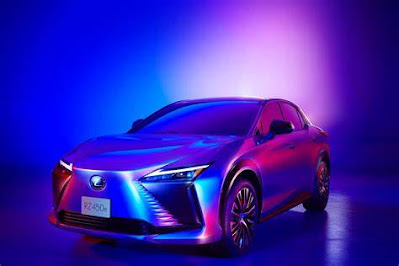 Lexus' First All-Electric SUV RZ 450e                                        Source:  Lexus RZ & E-Supercar New Suite of Electric Concepts Luxury brand Lexus is going electric in a very big way.  It has revealed its first all-electric SUV, the RZ 450e. It will roll out in late 2022.  Lexus has also unveiled a fleet of all-electric concept vehicles, including a supercar, a big SUV and a sedan.  For Lexus, this is the start of their future of electromobility.  They have big plans and target selling nothing but electric vehicles in the US, Europe and China by 2030.  Lexus says it will be selling only EVs globally by 2035.  And by 2030, it plans to be selling 3.5 million EVs a year. With Toyota and Lexus cutting edge technologies, it should be an epic new ride. RZ The RZ is a mid-sized SUV in the BEV category or battery electric vehicle.  BEVs have to be plugged in to charge the battery which powers the electric motors. Electricity is the only source of power for BEVs.  The RZ is
Post a Comment
Read more
More posts