Showing posts with the label #911 off-roads
Show all 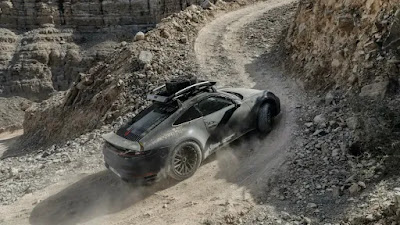 Powerful New Porsche 911 Variant To Debut in L.A                                                       Source:  Porsche Off-Roading 911 Tested in Very Rugged Environments For the first time in its history, Porsche has developed an off-roading 911 sports car specifically for the public not for competitive racing.  It's called the 2023 Porsche 911 Dakar and it will formally debut tonight at the Los Angeles Auto Show.  Porsche says this is a very special variant of its iconic 911.  And it is their first, 2-door sports car to offer rugged, off-road capabilities.  It has been rigorously tested in the most challenging environments and it is one tough off-roading vehicle. What We Know Porsche hasn't disclosed any specific performance data yet, but we do know that the vehicle has very hefty all-terrain tires, added clearance and a number of new features to maintain traction and control on loose surfaces.  The 911 Dakar has been put through 300,000 miles of tough, rigorous testing, in
Post a Comment
Read more
More posts