Showing posts with the label #Baojun
Show all 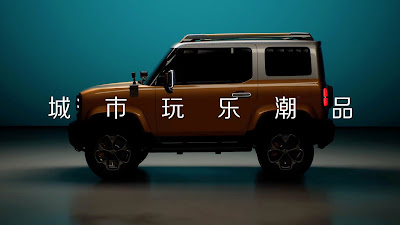 SAIC-GM-Wuling's Small, Electric Off-Roader with No Name                                        Source:  Baojun Teaser Images Very Small but Powerful Electric SUV Baojun, a subsidiary of the SAIC-GM-Wuling (SGMW) joint venture, has just released teaser images of what is being called by automotive experts "a mystery car" that is an awesome, tiny, electric off-road SUV.  The EV has rugged, off-road styling, along with a very small footprint, boxy-rectangular contours with rounded edges and traditional off-road proportions.  The vehicle is a bit of a mystery.  At this point, it has no name and no logo.  But it is a concept car that appears to be production ready.  And, it is not being taken lightly because part of the brainpower behind it is coming from no less than GM and top Chinese automakers SAIC and Wuling. Styling Features The electric SUV has a prominent grille panel with quad LED lights on either side and LED taillights.  The doors occupy the largest portion of the
Post a Comment
Read more
More posts