Showing posts with the label #FNR-XE
Show all 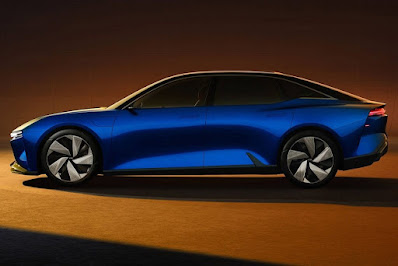 Chevy's FNR-XE Electric Sedan Concept                                   Source:  GM, FNR-XE Could This be the Next 4-Door E-Camaro? Chevrolet's latest concept car, the FNR-XE, is an electric sedan that Chevy calls a look at the next generation of intelligent electric vehicles. It is actually Chevy's 1st, all-electric 4-door sedan. The EV is the result of a collaborative effort between GM's global resources and PATAC, which is GM's Joint Venture with SAIC Motors of China.  The vehicle is sleek, athletic and is reminiscent of the iconic Camaro.  Some global automotive experts are wondering if this concept will eventually become the new, electric, 4-door Camaro. There is a lot of expert opinion that it will be. No matter what, the FNR-XE contains a number of firsts. New Firsts for Chevy The new EV concept is very important because it is Chevy's 1st, 4-door sedan that contains the new GM Ultium battery and propulsion architecture that can be scaled up and mass pro
Post a Comment
Read more
More posts