Showing posts with the label #Fort Lauderdale
Show all 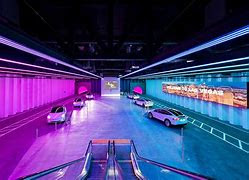 Underground Passenger Loop Between Downtown Fort Lauderdale & Fort Lauderdale Beach Source:  The Boring Company's Vegas Tunnel The Las Olas Loop Elon Musk and his Boring Company have proposed an underground passenger transit tunnel for the city of Fort Lauderdale, Florida to attain quick, easy access for residents and tourists from its downtown area of Las Olas to its popular Atlantic Ocean beaches. The proposal is at the request of the city of Fort Lauderdale.  If approved, the passenger transit tunnel will be called "The Las Olas Loop".  A vote on the proposed transit tunnel will be taken by the city government on Tuesday, July 6th.  If approved, it will be the first "loop tunnel" on the east coast and the second in the world.  Musk and his not-so-boring, Boring Company have completed a transportation tunnel for Las Vegas.  The Las Vegas Convention Center Loop became operational in June. Unique Travel Technology The Las Vegas Loop is 2 miles long and exten
Post a Comment
Read more
More posts