Showing posts with the label #Lucid Air Dream
Show all 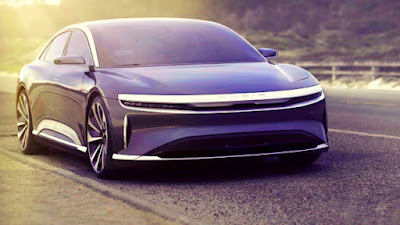 Record EPA Range of 520 Miles for Lucid Air Dream EV                                                Source:  Lucid Air This is the All Electric Record Range According to the US Environmental Protection Agency (EPA), Lucid Motors, a California based EV startup, has trounced the world's largest EV maker Tesla on range with a debut electric sedan at an officially rated 520 mile range.  That makes Lucid Motors the top winner on range on a single charge.  The win from the EPA for Lucid came on its battery electric Air Dream edition sedan.  The range win more than overshadows Tesla's highest range model - the S - which has an EPA estimated range of 405 miles.  Lucid plans to start building 500 Air Dream sedans with the 520 mile range.  That is a conservative start as Lucid is testing the market for the EV with the top EPA rated range of 520 miles at a price-tag of $169,000. EV Races The race for the longest range, most powerful, fastest, relatively inexpensive and easily rechargeab
Post a Comment
Read more
More posts