Showing posts with the label #MOXIE
Show all 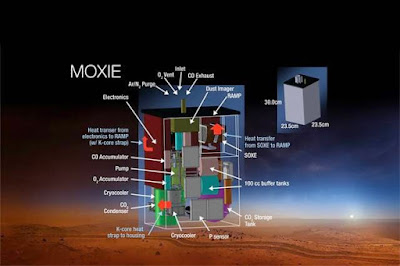 World 1st: Pure, Usable Oxygen Extracted on Mars                                        Source:  NASA - MOXIE MOXIE Science Rover Did the Job NASA's Mars Mission has achieved another world first.  It has extracted breathable, pure oxygen from the thin Martian atmosphere.  This extraordinary feat was accomplished by a piece of technology onboard the Perserance rover.  MOXIE, a small science rover that is the size of a toaster - extracted and converted carbon dioxide into oxygen.  MOXIE stands for Mars Oxygen In-Situ Resource Utilization Experiment. Impressive Technology MOXIE uses electrolysis to separate molecules of oxygen from molecules of carbon dioxide, using extreme heat.  95% of the Martian atmosphere is composed of carbon dioxide.  The initial oxygen created was small:  about enough to provide ten minutes worth of oxygen to an astronaut.  But it is the first time in history that a natural resource, directly usable by human, has been extracted on another planet. Scaling Up
Post a Comment
Read more
More posts