Showing posts with the label #SD-50
Show all 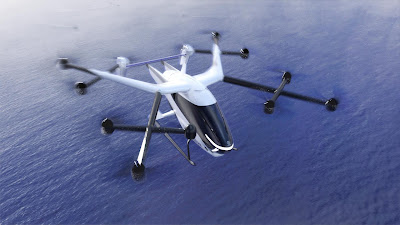 2-Seat eVTOLs Made in Japan                                                  Source:  SkyDrive Hot Japanese Startup SkyDrive Japanese eVTOL startup SkyDrive intends to introduce flying taxi service at the World Expo 2025 in Osaka, Japan.  The company just unveiled its new, two seat SD-05 eVTOL which will be the flying taxi vehicle taking passengers on short flights around the big event.  SD-05 is the next technological iteration on the original one-seat, sporty prototype SD-03 which has been successfully flown in demonstrations in Japan since it was introduced in 2020.  SkyDrive is a hot eVTOL startup with a partnership with Suzuki and millions of dollars in investment money bankrolling the development of its flying taxis. It just raised $66 million in a Series C funding round to build the SD-5's as well as its cargo drones. New Technologies & A Bird-Like Design The SD-05 will be piloted by a human who will get lots of assistance from a computer-controlled flight system.  The
Post a Comment
Read more
More posts