Showing posts with the label #Smart Summon
Show all 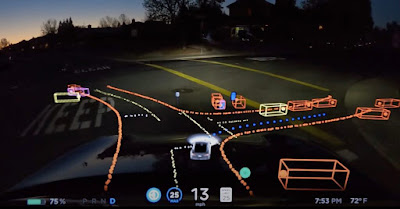 New Software Upgrades Promised within a Few Weeks Source:  Tesla "Smart Summon" To Be Offered in Europe   Tesla CEO Elon Musk says the company will be rolling out significantly improved self-driving technology within a few weeks.  Subscriptions for the new software will be offered this month.  Musk also tweeted that Tesla is making available its "Smart Summon" technology in Europe by the end of 2021.  The technology enables a driver to summon their vehicle in a parking lot by using a phone app. That handy feature is now available in the US. Under Scrutiny Tesla's autonomous driving technology is under scrutiny following several recent crashes.  Two people were killed in an accident in Texas, although it is disputed whether the car was driving itself or a human was behind the wheel.  Since October 2020, some Tesla employees and customers have been testing a beta version of Tesla's full, self-driving technology.  Tesla continues to work on the technology and
Post a Comment
Read more
More posts