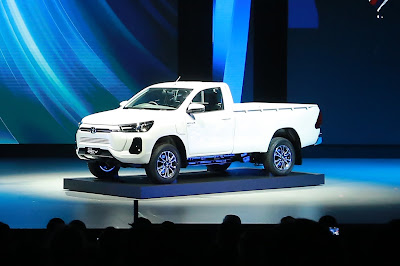 Hilux Revo BEV                                        Source:  Toyota Toyota's Holistic Approach to Electrification Toyota has unveiled its first, fully electric pickup truck. The battery electric vehicle (BEV) is called the Hilux Revo BEV prototype and it's designed to be an everyday, workhorse truck capable of a mix of functions. It has a unique configuration of cargo and passenger space. It appears to be ready to go into production.  The debut took place in Thailand as part of Toyota's 60 years of operations there.  The big question is:  will it be sold in the US?  Toyota hasn't announced its intentions with the EV yet, but it has been teasing about an electric pickup for the US market since 2021. More Details The Hilux Revo BEV is a midsized truck with a single cab and an extended bed.  The charging port is on the front, left fender.  Toyota has not released details on the powertrain and range on a charge.  Interestingly, Toyota executives say they are not convinc
Post a Comment
Read more
More posts