Showing posts with the label #XM
Show all 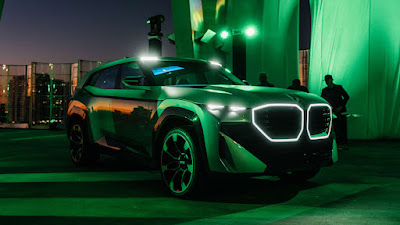 750 Horsepower of Power and Energy Source:  BMW XM SUV Concept BMW's Concept Will Go into Production To celebrate BMW M model's 50th anniversary, BMW has unveiled a striking and powerful, plug-in hybrid electric SUV with 750 horsepower, the XM SUV concept.  It becomes the second M after the M1.  The XM is a performance vehicle that BMW is putting into production.  The boldly designed vehicle is striking with very angular lines, a huge front grill and extended hood.  It is like an artistic geometrical design in motion.  All of which is highlighted and enhanced by a sharply thin line of LED lighting. Tech Specs The XM concept is loaded with state-of-the-art technology designed for high performance.  The hybrid powertrain consists of a twin turbocharged, 4.4 liter V8 engine combined with an electric engine.  The electric motor has a 50-mile range on its own.  The combination pumps out 750 hp and 737 ft lbs. of torque.  The new concept is more powerful than Porsche's Cayenne
Post a Comment
Read more
More posts