Showing posts with the label #auto innovation
Show all

Renault's Flying Car Is a Classic 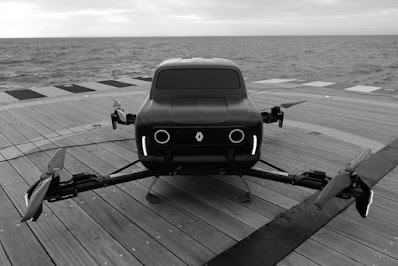 AIR4 Flying Car Concept                                                   Source: Renault Renault Celebrates 60th Anniversary of the 4 French automaker Renault has converted its highly successful 60-year-old hatchback model car, the 4, into a flying car to celebrate its 60th anniversary.  They call it the Renault AIR4.  Renault has been working with the design firm The Arsenal to build an operational prototype of AIR4 that demonstrates what the flying hatchback will look like in six decades ahead of now.  At the moment it's a carbon fiber concept that has been successfully flown.  The 4 has been an automotive fixture and success story in Europe for decades.  More than 8 million of the iconic Renault 4 have been sold in more than 100 nations. Tech Specs The flying car is comprised of two components. The first component is the car body, which reflects the legendary, 4 hatchback design and style. It has one seat, a minimalist cabin and bright lights in the front and back of the car
Post a Comment
Read more
More posts