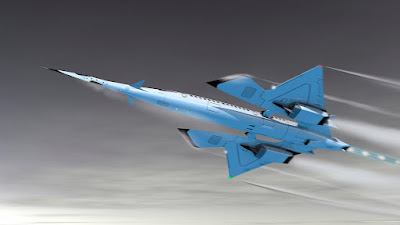 New Supersonic Passenger Jet That Travels Mach 3.5                                             Source:  Oscar Vinals New York to London in 80 Minutes An exciting new flying concept, the Hyper Sting, has just been unveiled by famed, Barcelona-based aviation designer Oscar Vinals.  It's a supersonic passenger aircraft that can fly at three times the speed of sound or Mach 3.5.  That speed would enable travel from New York City to London in just 80 minutes.  Designer Vinals says this SST is very feasible, but it will require the development of new, advanced technologies. Future of Flying This fascinating new piece of aviation technology, that showcases a supersonic future, would be capable of carrying 170 passengers.  It is powered by a cold fusion nuclear reactor that fires up and sustains 4, next generation hybrid turbojets and 2, ramjet engines.  It is bigger and wider than the Concorde at 328-feet long and the wingspan is 169-feet. The shape of the plane is sleek and distinctive
Post a Comment
Read more
More posts