Showing posts with the label #concept cars. #Italy
Show all

A Look at the Future of Autonomous Cars 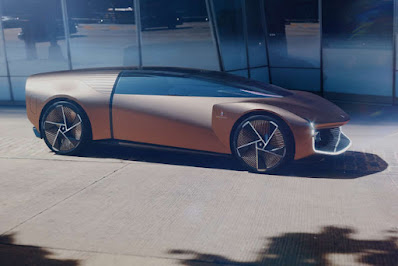 Italy's Pininfarina Design House's Teorema Concept Car                                           Source: Pininfarina's Teorema Is This The Future of Driving? T he Italian design house Pininfarina is known for producing some of the world's most futuristic and radical concept cars and production cars.  They have just unveiled a truly revolutionary concept - the Teorema.  It showcases radical design and highly advanced engineering that is part of the future of driving. This vehicle was designed using virtual reality (VR) and augmented reality (AR) technologies.  And, the electric vehicle is fully autonomous without any steering wheel and seats 5 passengers. AR &VR Designed Using highly advanced AR & VR technologies, Pininfarina has created a unique, very sleek and futuristic design with the window line tapering down along the sides of the car.   The design is so radical that from some angles the vehicle doesn't look like a car.  The shape is cylinder-like and
Post a Comment
Read more
More posts