Showing posts with the label #drownings
Show all 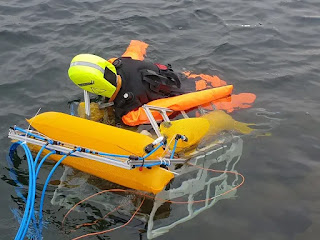 Robot Designed to Prevent Drownings                                          Source:  Fraunhofer Institute Rescue Aquatic Robot German researchers have created an autonomous, underwater robot to rescue people in danger of drowning.  The team of scientists and roboticists are from the Fraunhofer Institute for Optronics, System Technologies and Image Exploitation in Germany.  The robot, called DEDAVE, is said to be a world robotic first.  DEDAVE is a prototype now under development Advanced Technologies When used at a pool, DEDAVE uses surveillance cameras mounted on the ceiling above the pool to spot the movement patterns of someone in danger of drowning. The movement is identified by artificial intelligence based computer system. The robot is stored in a docking station at the bottom of the pool.  The camera sends coordinates to the robot that pinpoints the location of the person in distress. The robot releases from the docking station, uses its onboard cameras to locate and then res
Post a Comment
Read more
More posts