Showing posts with the label #dual mode travel
Show all 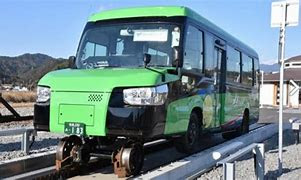 Japan Deploys  World's 1st Dual-Mode Bus-Train                                       Source:  Japan's DMV New Innovation From Japan Japan is putting into operation the world's first dual-mode vehicle (DMV), which is a bus that converts into a train.  The DMV is capable of driving on the road with its standard set of rubber tires.  And when it reaches its railroad destination, it can deploy its steel wheels to travel as a train on the tracks in just 15 seconds.  This 2-in-1 vehicle combination is now in commercial operation in coastal southern Japan.  It is being operated by the Asa Coast Railway Company and it is a world first in travel innovation. Tech Specs The vehicle is lighter in weight than most buses and trains.  The company says it operates on diesel fuel, but the light weight of the vehicle cuts down on emissions.  The vehicle can carry 21 passengers.  On the road, in bus mode, it can hit 62 mph.  On the tracks, in train mode, it can hit 37 mph.  The Asa Coast Rai
Post a Comment
Read more
More posts