Showing posts with the label #e-pickup truck
Show all

Rivian EV IPO at $70 B Valuation 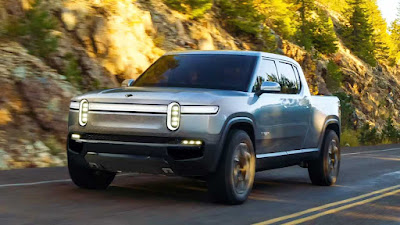 EV Rivian To Go Public on Nasdaq                                                  Source:  Rivian Multi Billion IPO on Nasdaq Irvine, California based electric vehicle maker Rivian is considered by many to be the leader of EV startups.  The company is expected to go public this week.  It is looking for a valuation of $70 billion which would put in the major leagues alongside of Ford, which is valued at $77 billion, and GM, which is valued at $85 billion.  Many stock market analysts and automotive experts are asking is Rivian the next Tesla?  It certainly does have big backers. Amazon With a 20% Stake The company is backed by Ford and Amazon, which has a 20% stake. Rivian plans to list on the Nasdaq with the symbol "RIVN".  Despite the fact that it is a startup, the company has a revenue stream. It has put its electric pickup truck R1T into production and plans to deliver 1,000 pickups to customers by the end of 2021.  It also has a big contract with Amazon to deliver 100,00
Post a Comment
Read more
More posts