Showing posts with the label #electric racing
Show all 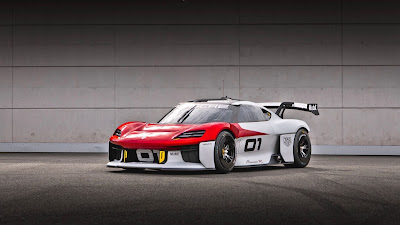 Electric Future of Racing Based on 911 Carrera Cup Car Porsche has unveiled a spectacular new electric race car concept that is modeled on an historic Porsche racing car, the 911 Carrera Cup Car.  Porsche says the car is "pure racing" and that it will go into production for purchase.  Experts says it may be the future of electric racing.  Porsche Chairman Oliver Blume says it is Porsche vision of all electric customer motorsports and embodies the best in Porsche performance, design and sustainability.  Importantly, this new electric concept could be the precursor to an electric road car for consumers.  In fact, it is very likely that it will be. Tech Specs - Fast and Powerful There are front and rear mounted electric motors that generate 680 hp in race mode and can produce a maximum of 1,088 hp.  The EV goes from 0 to 60 mph in 2.5 seconds.  It has a sleek aerodynamic design and can hit top speeds of 186 mph.  The rear of the car has a wing with a hydraulically activated fl
Post a Comment
Read more
More posts