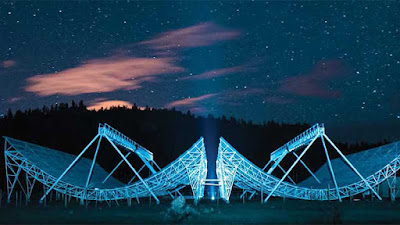 Tracked by a Powerful Telescope in Canada                            Source:  CHIME & 1st Radio Signal Burst Intergalactic Mystery International researchers using a high powered, new Canadian telescope named CHIME, have detected hundreds of fast and mysterious radio bursts in space that quickly disappear.  These bright flashes of light last for a millisecond.  The quickness of the signal makes it unpredictable and extremely difficult to track the origin and determine the reason why. As a result, astronomers are baffled and the source remains shrouded in mystery. These fast radio signals from space have a name - FRB's.  140 FRB bursts of lighted radio signals in space were observed between 2008 and 2018.  Experts believe, because of the CHIME telescope, the vast majority of radio bursts have gone undetected, until now. CHIME in British Columbia The highly advanced telescope CHIME went live in 2018 in British Columbia.  In the first year of its operation, it detected 535 fast r
Post a Comment
Read more
More posts