Showing posts with the label #independent design concept
Show all 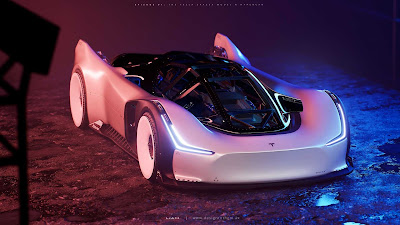 German Automotive Designer's Take on Next-G Roadster with Rockets                                         Source:  Maximilian Schneider This Roadster is Cool in Every Way Tesla CEO Elon Musk first unveiled his 2nd-generation Roadster concept in 2017.  He was supposed to launch it in 2020 and then punted the launch date back to 2023.  Rather than wait any longer, a very talented German automotive designer, Maximilian Schneider who has worked for Audi, Mercedes and VW, created his highly original and innovative design of what the potential is for the next G Roadster. Schneider took Elon Musk's concept to put rocket boosters on the car and Schneider made them aa main feature.  It's called the Tesla SpaceX Model R.  It's a hypercar that has tremendous technologies in it and is quite a beauty. Radical Car Design and Performance Schneider's design is so radical, futuristic and advanced it doesn't look like a Roadster. It's an all-electric, 4-wheel drive sports car
Post a Comment
Read more
More posts