Showing posts with the label #intercity travel
Show all 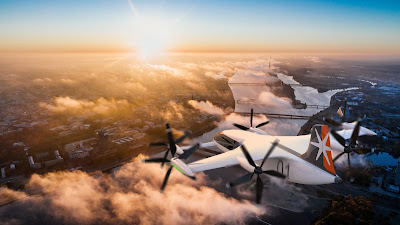 South Korea's Plana  eVTOLs                                                  Source:  Plana Target:  Intercity Travel South Korean startup Plana is developing a 7-seat hybrid-electric, vertical takeoff and landing vehicle (eVTOL) for intercity, regional commuter flights.  The company, founded by the executive who ran Hyundai's early eVTOL operations, plans to put their flying taxis into service in 2028.  The technology is specifically designed for longer haul, intercity flights such as Boston to New York City.  The vehicle has a 350-mile range on a charge and can travel at speeds up to 217 mph. Thus far, the company has raised nearly $10 million in investment funding.  Tech Specs The design of Plana's flying taxi is unique.  The fuselage is long and thin and flows into an upper main wing. The eVTOL is powered and propelled by 6, five-blade tilting electric propellers.  There also is a canard, which is a small winglike projection attached in front of the main wing to provide
Post a Comment
Read more
More posts