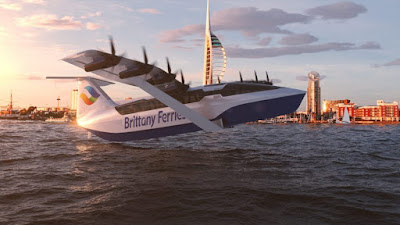 Seagliders at 180 mph Skimming the Waves                    Source:  Brittany Ferries Seaglider Artist Rendering Crossing the English Channel in 40 minutes UK ferry operator Brittany Ferries is collaborating with Boston startup Regent Craft to develop a zero emissions, electric, super fast ferry that skims above the waves like a hydrofoil.  The Seaglider electric ferry is a battery powered craft that is part plane and part ship.  It's a regional, electric, ground effect, nautical transport (Regent) vehicle.  It could reduce the time it takes to cross the English Channel between Portsmouth, England and Cherbourg, France from 8 hours by conventional ferry to 40 minutes.  The Seaglider is being developed to reach speeds of 180 mph, carry up to 150 passengers and is expected to launch in 2028.  Smaller versions will launch as soon as 2025. Awesome New Travel Technology Seaglider technology is similar to that of a hovercraft and  a hydrofoil.  It incorporates wing-in-ground effect tec
Post a Comment
Read more
More posts