Showing posts with the label #nuclear powered planes
Show all 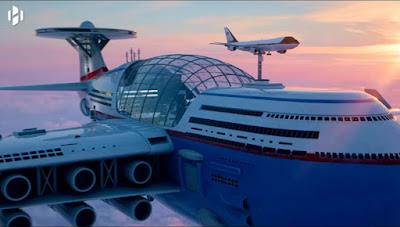 Sky Cruise: Gigantic Nuclear-Powered Aircraft                                        Source:  Hashem Al-Ghaili Room for 5,000 Guests and Endless Flights The Sky Cruise is a fantastical, pure science fiction airplane concept that in all likelihood defies the laws of aerodynamics and physics, but in this time of an aviation technological renaissance, who knows!!  It's a huge, nuclear-powered aircraft envisioned to be a 5-star resort in the skies.  It's the fascinating invention of Swedish Art Director Tony Holmsten that has been brought to life through animation by Yemini biotechnologist and video producer Hashem Al-Ghaile, who created the images of the airplane concept.  This 5-star flying hotel can hold 5,000 guests and thanks to nuclear power it would be capable of flying for years without landing.  The e-plane is a combination spaceship and cruise ship on steroids. It's a fascinating, futuristic travel idea to think about over the lazy 4th of July holiday weekend. New T
Post a Comment
Read more
More posts