Showing posts with the label #planes & helipads
Show all 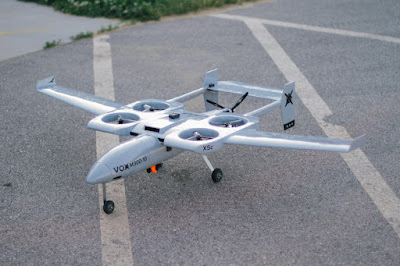 Vox's Vertical Takeoff & Landing Aircraft                                             Source:  Vox Aircraft Plane Can Land on Any Helipad - World First For the past 30 years, Chicago-based aviation company Vox Aircraft has been developing a unique, hybrid aircraft that takes off and lands like a helicopter.  The vertical takeoff and landing vehicle (VTOL) is now a reality.  It's a hybrid electric plane that can provide point to point travel at two to three times the speed of a helicopter.  And, the plane doesn't need an airport.  It can land on any helipad.  The company says that it is "the world's first hybrid aircraft".  Also of significance, it burns half of the fuel that a similarly sized rotorcraft consumes.  So, it enables greener flying. Tech Specs The plane has four turbofans embedded in the fixed wings for vertical takeoffs and landings.  It also has a single rear rotor that provides forward thrust. The hybrid power system is blended to accommodat
Post a Comment
Read more
More posts