Showing posts with the label #power your home
Show all 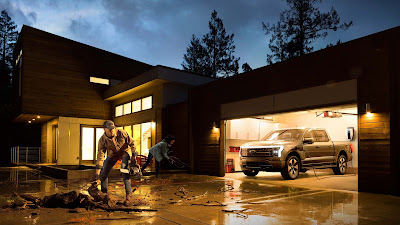 Electric Vehicle Generator Powers a Home                                             Source:  Ford EV Electricity Gives Back to the Grid Millions in the northeastern part of the US lost power for days in late October due to a severe "nor'easter" storm.  A year from now the no power nightmare could be reversed for some by EVs like the new F-150 Lightning that will hit the market in 2022.  The Lightning is capable of powering a home for 3 days.  The EV can act as a generator by using its battery to light up and heat the owner's home.  Other EVs like the Nissan Leaf have a similar capability.  And, VW and Hyundai are developing the same technology which is known as bidirectional charging. Bidirectional Charging With bidirectional charging, the EV battery can receive energy and also discharge it to supply power.  The battery is also capable of sending back power to the grid, which is known as V2G (vehicle to grid).  As the number of EVs on the road climbs, that will exp
Post a Comment
Read more
More posts