Showing posts with the label #short takeoff & landing
Show all 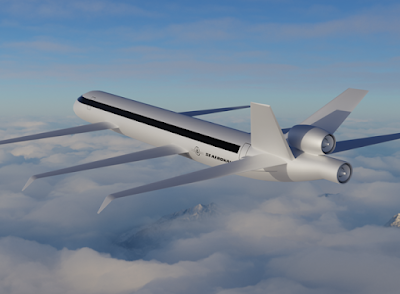 SE Aeronautics' New SE 200 Could Revolutionize Flying                                             Source:  SE Aeronautics Short Takeoff & Landing Potential SE Aeronautics of Alabama is developing a revolutionary new, tri-wing commercial jumbo jet concept.  The SE 200 has a very disruptive and innovative design approach.  Besides the tri-wings, there are a double tail fin and two engines on the back of the plane.  It can carry 264 passengers at a speed of nearly Mach 1, all the while using 70% less fuel than a similar sized jet, greatly reducing the greenhouse gas emissions. Highly Advanced Technology and Many Advantages Some aviation experts believe that the SE 200 could revolutionize the aviation industry.  The prototype is configured with a high lift wing design which enables short distance takeoffs and landings.  That would increase the number of smaller airports that the aircraft could service.  The vehicle has a range of 10,560 miles and can hit top speeds of Mach .90 or
Post a Comment
Read more
More posts