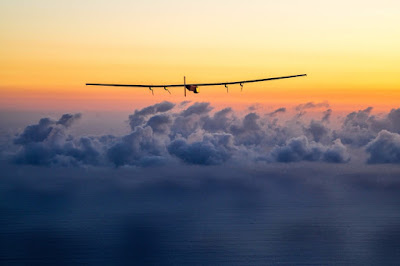 Skywalker Can Fly for 90 Days Straight                                              Source:  Skydweller Aero New Green Travel Technology The US Navy is developing, in conjunction with aerospace company Skydweller Aero, a breakthrough solar powered plane that is pilotless and can fly nonstop for 90 days straight.  It is called Skywalker and the solar technology powering the plane is spectacular.  There are 2,900 square feet of solar cells on the wings which generate 2 kilowatts of power.  The solar plane can soar nearly 46,000 feet into the air and cruise at 100 knots.  The potential uses for this aircraft are fascinating.  It can serve as a conceptual technology platform for green commercial air travel in the future.  It will be used as a communications platform for the US Navy to monitor and communicate with naval ships.  Skywalker is considered an unprecedented autonomous system for commercial and government uses in telecom, transportation, meteorology, geospatial applications and
Post a Comment
Read more
More posts