Showing posts with the label #special forces
Show all 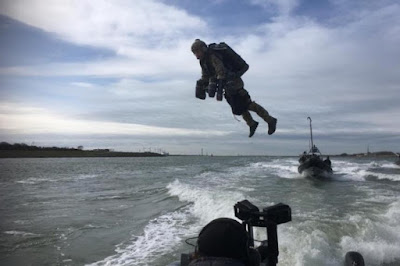 Gravity Industries' Jet Pack Targets Ship Hijackers                Source:  Gravity Industries Jet Suit in Netherlands Test New Aviation Technology on the Cutting Edge of Saving Lives Seizing control back of a hijacked ship on the high seas is one of the most difficult challenges for global special forces in the fight against terrorism.  They either try rappelling down a rope from a hovering helicopter or use ladders on small boats at night to climb onboard.  Many times, these strategies loose the element of surprise.  Now from a former Royal Marine, Richard Browning who is the CEO of the UK's Gravity Industries, there is a third solution to taking control back from hijackers of a ship on the high seas.  Browning's Jet Suits have the potential to revolutionize counter-terrorism on land and sea. They have just been demonstrated to work by the Dutch Maritime Special Operations Forces in a simulation to board and save a commercial ship in the Netherlands.  It was a proof of
Post a Comment
Read more
More posts