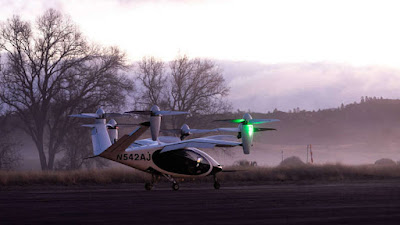 Joby Aviation's e-VTOL Being Tested by NASA                                                                      Source:  Joby and NASA NASA's Ultimate Goal:  Safely Accelerate Use of Air Taxis NASA has started testing a future air taxi for use to ferry passengers and cargo, particularly in big, congested cities.  The vehicle is a six rotor, all electric e-VTOL (electric, vertical take off and landing vehicle) developed by startup company Joby Aviation of California.  This particular aircraft is designed to be as quiet as possible in order to operate in busy cities and relieve traffic congestion without a lot of noise pollution. Joby plans to put its flying taxis into commercial operation in 2024.  NASA's ultimate goal in initiating its testing program is to safely accelerate the use of flying taxis in the US. Air Noise Pollution Tests The tests are being conducted by NASA's Advanced Air Mobility (AAM) group, which has launched a national campaign for the development
Post a Comment
Read more
More posts