Showing posts with the label #worlds fastest train
Show all 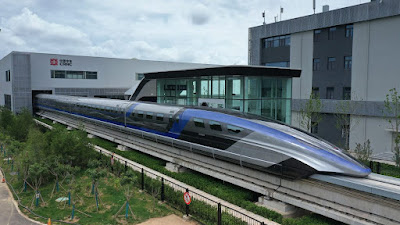 China's   Levitating Maglev Train Source:  China's Maglev Train Fastest Ground Vehicle on Earth China has revealed a Maglev train that is capable of travelling more than 370 mph. The train uses electromagnetic force to hover above the track.  There is no contact between the train and the rail.  The highly innovative and breakthrough train is the fastest ground vehicle on Earth.  It has the potential to travel from Beijing to Shanghai, which is a 620-mile distance, in 2&1/2 hours.  Travelling the same route by a conventional plane takes 3 hours.  Current high-speed rail service takes 5&1/2 hours.  This prototype train is a real game-changer in the world of travel.  Awesome Technology This technology is remarkable.  It is called magnetic levitation.  Electromagnetic force allows the train to levitate above the rails.  There is no friction, enabling the train to hit scorching speeds.  The potential of the technology is 600 mph plus.   Future of the Technology The future o
Post a Comment
Read more
More posts