Showing posts with the label #zero emissions trucks
Show all 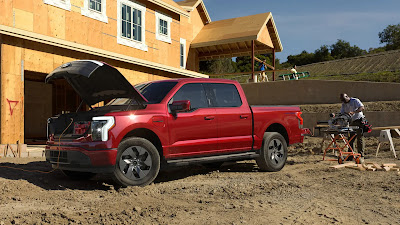 F-150 Lightning Pickup Goes into Expanded Production                                                       Source:  Ford "The Truck For the Masses" Ford Motor Company has announced that it is more than tripling production volume of its electric F-150 Lightning pickup because of booming demand for the EV. Automotive experts are calling Lightning the most transformative vehicle in the 119 year history of Ford.   Unlike its $200,000+ competitor Tesla's Cybertruck, the Lightning is priced at $40,000 and Ford is calling it "the e-pickup for the masses".  The EV is at the forefront of Ford's efforts to retool and revitalize their brand into a green vehicle powerhouse.  Ford had planned on producing 40,000 Lightnings per year.  Because of rapidly escalating demand, they have decided to more than triple production to 150,000 yearly. More than 200,000 customers have ordered the EV.  Ford CEO Jim Farley says Lightning will hit showrooms in the next few days. Ford En
Post a Comment
Read more
More posts