Showing posts with the label #Ford & EVs
Show all 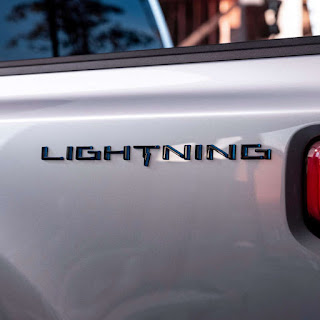 Ford's Long Anticipated Electric Pick-Up to Debut Source:  Ford A Truck That Can Power Your Home During a Power Outage The long anticipated Ford F-150 electric pickup truck got a name today - F-150 Lightning.  Ford says it will unveil the EV on May 19th and released a teaser image of the Lightning insignia.  The company provided little details on the capabilities and the design of Lightning.  But Ford CEO Jim Farley released a statement saying the F-150 is now going digital and fully electric.  He added several fascinating details.  He said Lightning can power your house during a power outage.  The EV is faster than the original F-150 Lightning Performance truck and it will constantly improve through over the air updates. Production on the vehicle will start in spring 2022. Ford's F-150 Cash Cow Ford's F-series of pickup trucks is the biggest franchise within Ford and the biggest selling vehicle in the US for years.  It is second only to the iPhone in sales as a branded c
Post a Comment
Read more
More posts