Showing posts with the label #GAUSSIN
Show all 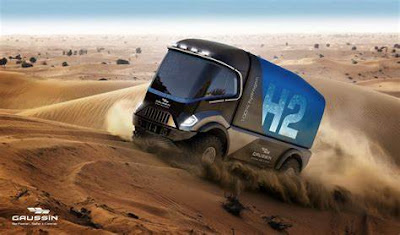 France's H2 Race Truck by GAUSSIN Off to the Hydrogen Races in Saudi Arabia Developed in France, the GAUSSIN H2 Racing Truck will compete in the rigorous Dakar World Rally-Raid Championship racing event in Saudi Arabia in January 2022.  This will be a world first in racing and the H2 Racing Truck is the first vehicle in GUASSIN's lineup of zero emissions, 100% hydrogen, electric road trucks.  The truck was designed by the renowned Italian design studio Pininfarina.  It will race across the Saudi desert to demonstrate the capabilities of hydrogen electric vehicles operating in harsh and difficult conditions. The vehicle is the first hydrogen truck specifically designed to race in the Dakar Rally. Tech Specs The truck is built to withstand the extremely rugged conditions of racing in desert sands. The truck has an ultra-light chassis to house the hydrogen system.  The H2 Racing Truck has a range of 250 miles and can be refueled in 20 minutes.  It's powered by two electric m
1 comment
Read more