Showing posts with the label #Hanyang Robotics
Show all

Let the Robot Do Snow Blowing 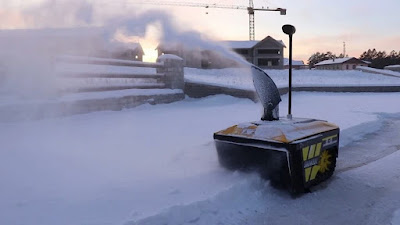 World's First Autonomous Snowblower                        Let the Robot Do the Shoveling A new, intelligent robot, developed by China's Hanyang Technology Company's robotics group Hanyang Robotics, could make snow shoveling obsolete.  Snowbot is an intelligent, autonomous, robotic snowblower that can clear 1500 square feet of snow on a single charge.  Snowbot can scoop up and blow away up to a foot of snow.  It is totally autonomous and powered by electric motors.  It can be controlled with an app on your phone or by remote control.  And, unlike current snowblowers powered by diesel, Snowbot is totally emissions free.  The company says it is the world's first autonomous snowblower.  It can clean 1.3 feet of snow per second. Very Advanced Technology Snowbot actually creates a map of the area to be cleared of snow.  It uses 4, ultra-wide band positioning terminals.  Three of the positioning terminals stake-out the area to be cleared of snow and serve as transmitters to
1 comment
Read more
More posts