Showing posts with the label #ebike collaboration
Show all 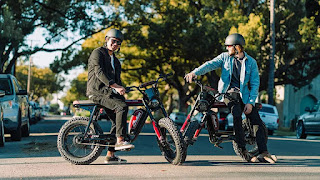 New Partnership Between Indian and Super 73 Produces Stunning e-Bike                        Source:  Indian Motorcycles' e-Bike Hooligan The Hooligan 1.2 Legendary motorcycle maker Indian Motorcycles and e-bike maker Super 73, both headquartered in the US, have partnered to create a stunning new electric bike that is getting great reviews.  The new, all electric bike is called the eFTR Hooligan 1.2 or Hooligan for short.  The e-bike is a classic that does not require a special driver's license. It has some classic features that rollback to Indian's 112-year motorcycle history that began in Springfield, Massachusetts and now continues in Medina, Minnesota. New e-Bike Design The Hooligan base is that of the Super 73's very popular e-bike S2.  Indian used the S2's aluminum frame and added some big design upgrades from their motorcycle expertise and their bikes' legendary looks.  The Hooligan has an inverted telescoping front fork and also unique handlebars from I
Post a Comment
Read more
More posts