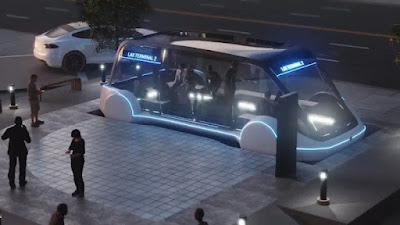 Tesla Electric Van For People & Cargo                                    Source:  Teslarati Ideas for E-Van A Van With Solar Canopies In a series of ongoing Tweets, Tesla CEO Elon Musk is doing a big tease about a new futuristic vehicle to join the Tesla electric lineup.  Apparently, he is interested in creating an electric van, which Tesla currently does not offer, to transport people and cargo.  What he specifically has in mind is a "Robovan for people and cargo." If it's robo, that would make it an autonomous, self-driving, electric vehicle.  When Musk tweets, his more than 100 million followers listen.  He also has a $44 billion offer on the table to buy Twitter, which tonight Musk says could be in danger because of what he and his team consider a lack of transparent information on fake accounts on Twitter. Experts say Musk may find it legally difficult to back out of the Twitter buyout deal. UPDATE: he just backed out of the deal at around 6:30 PM EST on 7/8/2
Post a Comment
Read more
More posts