Showing posts with the label #new tech.
Show all 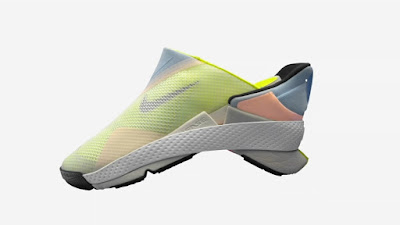 GO Flyease Slips onto Your Feet Source: Nike Nike Redefining the Mechanics of Shoes Nike has invented the world's 1st hands-free, no laces sneaker.  It is designed to make shoes more accessible and easy to put on for everyone, including those with arthritic hands or stroke victims who have lost use of their hands.  The GO Flyease sneaker has a patent pending hinge embedded in the outersole that enables the wearer to put it on their feet without having to use their hands.  Nike says they have literally redefined the mechanics of shoes with the GO.  They expect the sneaker to have wide appeal because of the ease of putting it on.  They also plan on further developing it for sports. Shoe With a History The shoe goes back to 2008 when then Nike CEO Mike Parker learned that Nike's first employee has suffered a stroke and lost use of one hand.  Parker asked Nike's lead designer to make a hands-free shoe.  Nine years later, a prototype shoe that could be zipped on with one hand
4 comments
Read more
More posts