Showing posts with the label #hypercars
Show all 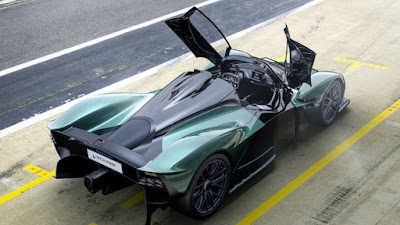 New Tech Ride of the Valkyries                                             Source:  Aston Martin A Hypercar Perfect for James Bond Aston Martin's Valkyrie is a hypercar that even before production has been sold to 150 people willing to put down a $300,000 deposit.  As you know, Aston Martin was secret agent James Bond 007's vehicle of choice.  A new variation of Valkyrie, the Valkyrie Spider, has just been unveiled at the Monterey Car Week 2021 in California.  It is spectacular and 85 more depositor owners have just ponied up and signed on for delivery for this new $3.8 million vehicle.  What's very notable about this extraordinary car is that it is hybrid electric and punches out a lot of power. Electric But Hugely Powerful The Valkyrie Spider is a hybrid electric vehicle but it has 1,139 horsepower to accelerate into action.  Add to that, it's a convertible.  The EV is composed of carbon fiber material.  The doors have modified windows that tilt forward rather than
Post a Comment
Read more
More posts