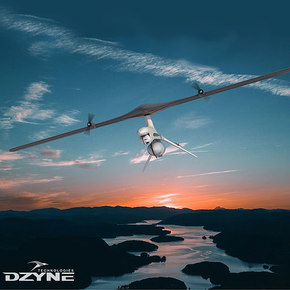 New Species of Aircraft
This is very innovative drone and aviation technology from DZYNE Technologies.  The company calls it a new aircraft species with its rotating wing design.  The wings of the ROTORwing VTOL drone can also work as helicopter blades.  The wings combine the functions of a fixed wing and propellers.   Conventional drones fly and land using separate fixed wings and a propeller.  Combining the two makes this flying machine radically different.

VTOL For a Variety of Missions from Intelligence Gathering to Package Deliveries
With advanced vertical takeoff and landing, the drone can take off from virtually anywhere and is airport runway independent. The company says it has a three hour ++ range, silent electric propulsion and can perform a variety of services from intelligence gathering to package deliveries.

Innovative Aviation Technology
The new drone has a set of top mounted fixed wings, each with a propeller.  The wings can rotate to form a helicopter like propeller.  After takeoff, they move into an upward position and return to a standard horizontal fixed wing position for flying.  DZYNE has facilities in Virginia, California and Arizona.