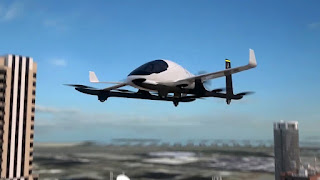 Test Flights in Three Global Cities 2020
A lot of news from Uber today. Uber Technologies has selected Australia's second largest city, Melbourne, as the first international test site for its air taxi service.  The test flights will start in 2020 in Melbourne, along with test flights in previously announced Dallas and Los Angeles.  The test service will link central city locations with nearby airports.

Commercial Launch 2023
The Uber air taxi fleet is electric powered and can be ordered on demand by customers through smartphone apps.  The fleet will have vertical takeoff, vertical landing and rapid horizontal flight.  The electric powered vehicles are part helicopter, part drone and part fixed wing aircraft with multiple small rotors.  Uber plans to provide commercial, on demand, ride-sharing air taxi service in 2023.  They also are exploring more locations for test flights including in France, Brazil, India and Japan.

Another New Partner
Uber has selected Signature Flight Support as a partner. Signature's airport facilities will run Uber's landing pads at airports and Signature will provide many more support and passenger services, for instance at city landing pads (in the artist rendering above) on top of a Dallas parking garage.  Uber is taxing into the vertical takeoff lane at a fast rate.