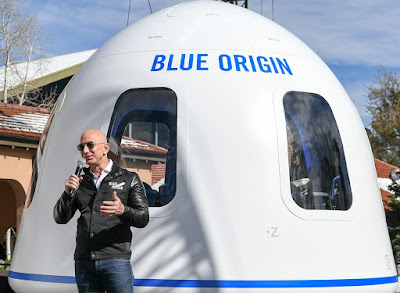 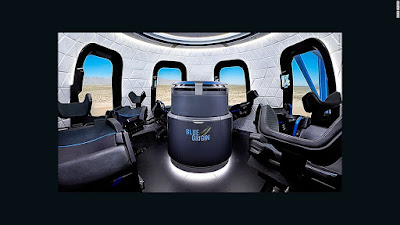 Billionaire in Orbit With his Blue Origin Space Company

Amazon founder & CEO Jeff Bezos and his brother Mark are flying to space on a Blue Origin flight on July 20th.  Blue Origin is the space company founded by Jeff Bezos.  This will be the first human flight launched by Blue Origin and the first mission manned by pilots.  In a post on Instagram, Jeff Bezos said going to space was something he wanted to do "all my life".  He will be taking the ride of his life on his own rocket, joined by his brother, the manned flight crew along with a soon to be announced passenger.

A Seat Is Up For Grabs

Blue Origin is auctioning off a seat in the capsule for someone who would like to join the Bezos brothers for the space flight.  Bidding for the seat has already reached $2.8 million and the auction closes on June 12.  Blue Origin has said in the past that the money will be donated to charity.

Jeff Bezos is one of the world's richest people with a net worth of $186.2 billion.  He and his mother started Amazon 30 years ago as a small book store in his mother's garage.  With cunning ingenuity and innovative business leadership, Bezos has built Amazon into the world's biggest online retailer. He is now focusing on Blue Origin to make it a dominant player in the commercialization of space.

Bezos is calling his planned July 20th space flight "the greatest adventure with my best friend", his brother Mark.  Bezos and Mark will be on the New Shepherd booster that can land vertically on the ground when returning to Earth.  Blue Origin will launch the spacecraft 62 miles above the Earth letting the passengers experience microgravity.  The capsule is capable of carrying six with the return to Earth achieved with parachutes easing the vehicle down to touchdown.  Two weeks before the space flight, Bezos will step down as CEO of Amazon, as had been announced.  He will remain as the Executive Chairman of Amazon.  The company says this will give him the time and energy to focus on other ventures like Blue Origin.  To take a look at the future of flying, go to https://read.amazon.com/kp/embed?asin=B093J89VF5&preview=newtab&linkCode=kpe&ref_=cm_sw_r_kb_dp_P3K32WHA2NN5NBJ3Z98B