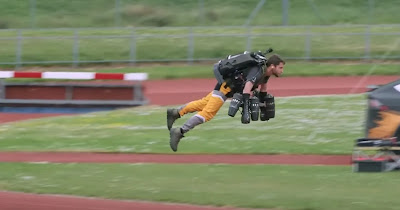 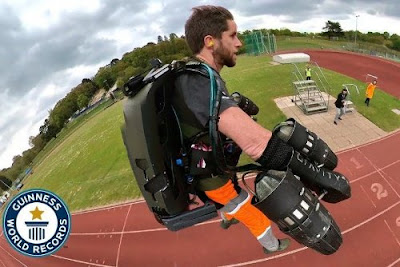 Gravity Industries of the UK

The British inventor of the flying jet suit, Richard Browning, broke three Guinness World Records this week at the Anker Speed Challenge sponsored by Guinness in Southampton, UK.  Browning and his jet suit broke three, global, track speed records, including one set by superstar runner Usain Bolt.  Browning is a former British Marine and the founder of Gravity Industries of the UK.

Browning set a new world record for the fastest 100 meter dash with his body controlled and powered by his jet suit.  Doing the dash in 7.60 seconds, he officially broke runner Usain Bolt's record of 9.58 seconds.

Browning did the unthinkable in setting a new world record for the 400 meter hurdle.  The jet suit powered him to clear each hurdle with a definitive up and down motion in 42.06 seconds.  The human record was 46.87 seconds.

With the pole vaulting bar set at 20.3 feet, which is .39 inches higher than the world record, Browning's body-controlled jet suit cleared the bar in 13.09 seconds -- a world record for height and time.  At the conclusion of his Guinness World Records track accomplishments, Browning said speed is the core ingredient of his jet suits.  Browning clearly demonstrated both the speed and the versatility of his technology, which is being deployed by the British military and first responder emergency services.  For a comprehensive look at the best in futuristic travel vehicles, go to https://read.amazon.com/kp/embed?asin=B095XDNZVD&preview=newtab&linkCode=kpe&ref_=cm_sw_r_kb_dp_V0SGQAVRTVJ86W44TSES