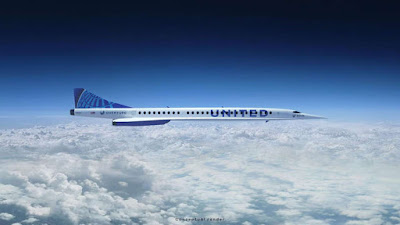 United Airlines just announced that it will purchase at least 15 supersonic jets from Denver-based Boom Supersonic.  This deal heralds the return of ultra-fast, supersonic flights, which ended in 2003 when British Airways shuttered its Concorde transatlantic flights.  Boom says its Overture SST will be capable of flying from New York City to London in 3&1/2 hours, cutting the flight time in half.  The deal is contingent on Boom clearing United's rigorous safety, operating and sustainability requirements.

United has an option to buy 35 additional aircraft from Boom.  The SST will be rolled out in 2025, go through rigorous testing and then supersonic passenger service is scheduled to start in 2029.  The SST is designed to run entirely on 100% sustainable aviation fuel and will produce net-zero carbon emissions.  Boom says the SST will have all business class seating and "an environment curated for comfort."  United says the plane will have in-seat entertainment screens, ample personal space and contactless technology.  It's the future of flying at supersonic speeds.  For a comprehensive look at the future of flying, go to https://read.amazon.com/kp/embed?asin=B093J89VF5&preview=newtab&linkCode=kpe&ref_=cm_sw_r_kb_dp_MGW25FB70D3Q5HS2B68M