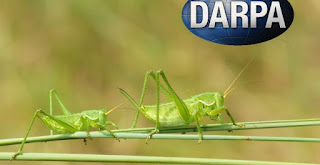 Protecting the Nation's Food Supplies
The US Defense Department's Advanced Research Projects Agency - DARPA- has a research project straight out of science fiction.  It's called Insect Allies.  The idea is to use insects, such as leafhoppers, aphids and white flies, to protect the nation's food supplies against drought, crop disease and bioterrorism.

Controversial Insect Armies
DARPA expects to achieve its "Insect Allies" goals by infecting the insects with engineered mutations and viruses that can be passed on to the plants to make them stronger or more resistant to biological attacks.  This project involves brand new technologies.  The concern and controversy is that the technologies could be used as weapons to destroy the enemy's crop supplies.  DARPA response:  most new technologies can be weaponized but that is not the purpose or intent of Insect Allies.  The goal is to protect the US food supply.
#DARPA #Insect Allies #insect weapons #insects #protect food supplies