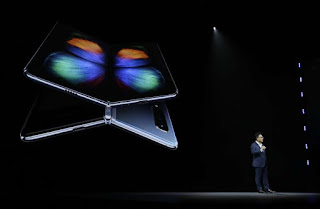 Samsung's Galaxy Fold
Samsung has introduced its Galaxy Fold and it has raised a major question.  How much are consumers willing to pay for a smartphone?  The Galaxy Fold in a 2 in 1 device.  It's a traditional smartphone that can fold out into a tablet.  It's priced at $1,980.  Samsung is betting the price is worth the phone's new innovation.  They'll start finding out when the phone hits the market on April 26.  For a great news blog on this,go to Important Innovations Collection: Smartphone Innovation at a Price: Samsung's New Folding Phone Nearly $2000 Source:  Samsung's Galaxy Fold Ringing in New Profits Samsung has unveiled its long ...
#Galaxy Fold #Samsung #smartphones #tablet