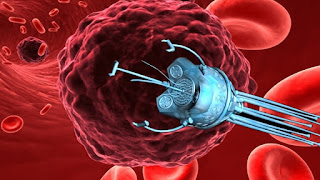 Both Philips and Chinese University of Hong Kong have aggressive research and testing programs underway.  The robots are microscopic.  Their motion is controlled by magnetic fields.  They swarm inside the human body to detect and treat disease.

The Chinese scientists have developed mini-robots by coating tiny particles of algae with biocompatible magnetic properties.  They're specifically designed for hard to reach areas of the body.  Researchers remotely operate and magnetically control them.  Imaging of the algae's natural florescence tracks the robots.  MRI tracking is also used.  Scientists successfully tested the robots on lab animals.  They're able to detect early signs of cancer. Also, they released potent therapies from their algae core without harming healthy tissue.

The German body bots are also swarming, microscopic robots that are magnetically controlled.  The robotic technology is a bit different than the Chinese bots.  They're called "Lego-bots" and move independently of each other.  Each contains a magnetically controlled screw.  German scientists magnetically control each bot in the swarm to perform individual tasks.  This is clearly medical and robotic innovation on the cutting edge of the global fight against cancer.

Precise tumor targeting is the most promising use.  Scientists inject the robots' screws or algae core with medicine.  They precisely control the drug delivery and amount.  The body bots will also detect and treat other diseases besides cancer.  Researchers believe another use is for medical implants.  As the patient heals, the body bots, through magnetic direction, could alter the implant to meet the patient's changing needs.